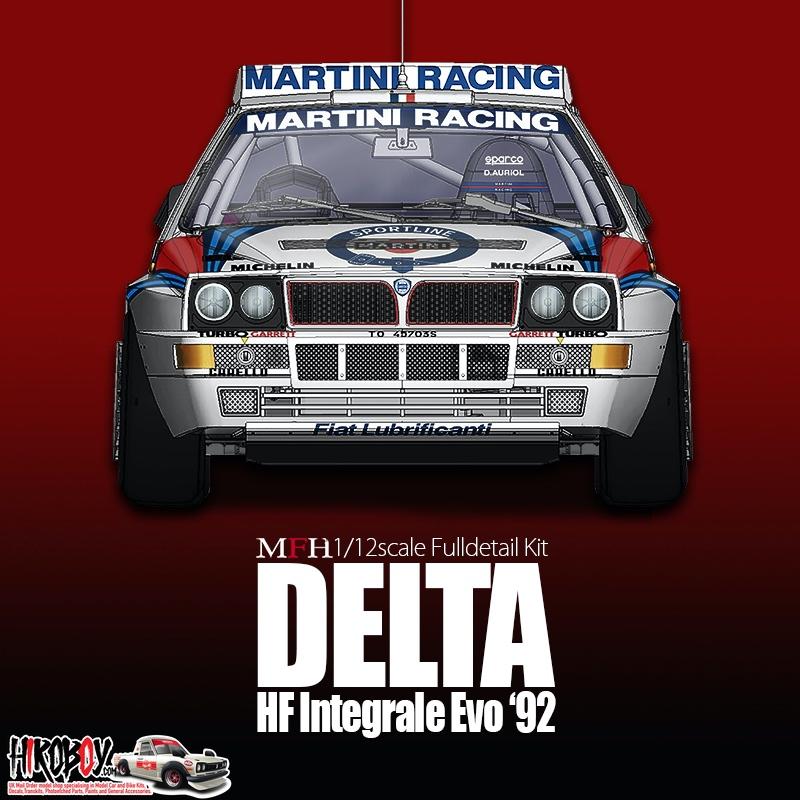 About the “DELTA HF Integrale Evo ’92”
With Group B regulations ending in 1986, teams prepared development for Group A regulations for the 1987 season of WRC. With the Delta S4 left unusable, the Lancia team would enter their new machine, the Delta HF 4WD, instead. Using the Delta production car as its base, the Delta HF 4WD was a four wheel drive featuring a 2L4 cylinder turbo engine. While the team lost their ace driver H.Toivonen in the previous 1986 season from a fatal accident, they managed to take the championship right from the car’s debut thanks to the efforts of drivers M.Biasion and J.Kankkunen.
In mid season of the follow year of 1988, the car was upgrade to the Delta HF Integrale, now featuring blister fenders and larger treads. It was unmatched in power and won many races in the seasons of 1988 and 1989. In the last race of 1989 in San Remo the car was further upgrade to the Delta HF Integrale 16V, featuring a 16 valve engine. In the following year of 1990 however, the team was pressured by the rival team’s Toyota Celica and their driver C.Sainz. Despite that fact, Lancia managed to take the Constructors Championship title for both 1990 and 1991.
In 1992 Lancia withdrew from the sport, and the Jolly Club team would continue to represent by entering the Delta HF Integrale Evoluzione for the season. Also known as the “Deltona” or “Super Delta”, the Delta HF Integrale Evo had a wider side fender, controllable rear wing, and larger bonnet barge. While Toyota’s Sainz won the driver’s title for the season, the car managed to take the Constructors Championship with 8 wins, making the 6th consecutive constructors win for the car. However after the win at the 11th race at San Remo in 1992, the Delta HF Integrale Evo did not manage another win for the rest of the season nor for the following season of 1993. The car would mark the last Lancia to be involved in the WRC, following the Fulvia, Stratos, 037 and S4.

The next 1/12 scale kit will be based on the final Lancia rally car, the 1992 version of the Delta HF Integrale Evoluzione.