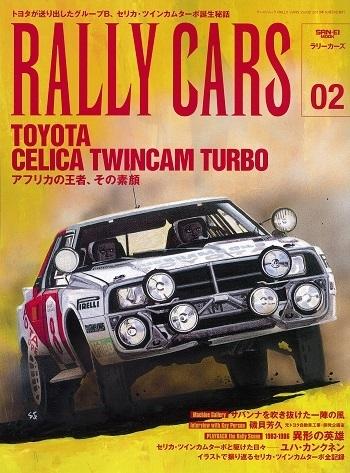 This is google translated from Japanese

Thank you very much the RALLY CARS future .
New series of one model one book " RALLY CARS "
2nd The Japanese-made Group B
Is " Celica Twin Cam Turbo !"

Era , the early 80 's when the superiority of four-wheel drive began to become clear .
Rally car was poised to evolve dramatically by group B provisions be introduced anew was decided .
In timing the times cut back significantly from the rally to fight in production vehicles manufacturer hand , to rally to fight in the car which was made in order to win , rally a conventional one was born .
Front engine , rear suspension rigid .
It draws to a tide of enthusiasm many people , feat of three consecutive Safari Celica Twin Cam Turbo have achieved while playing to the mid-engined 4WD coming soon to " connect " role became a cornerstone of Celica era to visit later .
Interviews of key personnel details of the machine , and the history of the 4T-GT engine , is one book of enhancement .