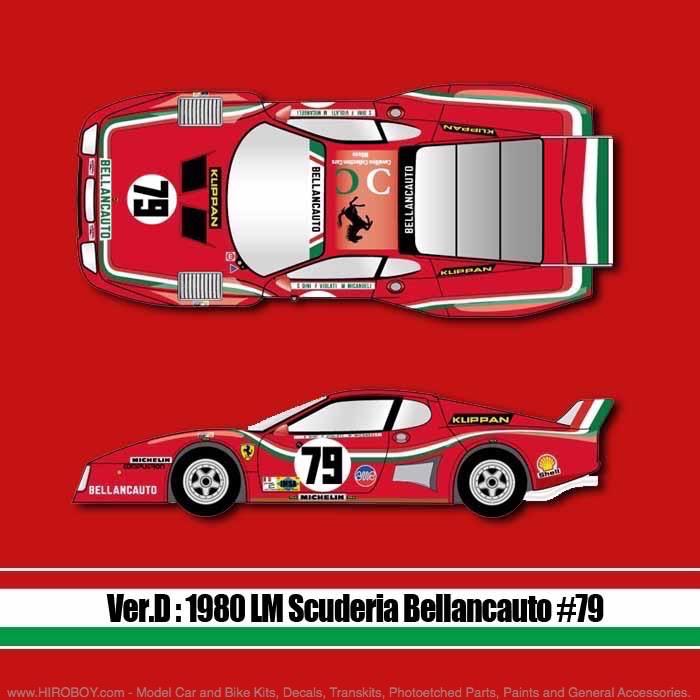 In the mid 1970’s, N.A.R.T. decided to enter Ferrari roadcars, namely the 365GT4/BB and 512BB into various races such as Le Mans and Daytona, believing the cars had the potential to perform just as well as a race sportscar after some race modifications.
However with minimal success, Ferrari decided that instead they would build a car specifically for the purposes of racing in Le Mans. Using the 512BB as a base, the 512BB LM was developed and made its first appearance on the circuit in 1979.
Featuring an 180 degree V12 engine, the 512BB LM separates itself further from its base 512BB with a completely redesigned body done by Pininfarina for the purpose of making it race worthy.
The first 512BB LM built were entered into Le Mans between the periods of 1979-1980. In the early 1980’s it continued to see action on the tracks through modified versions done by privateers, and a late version that featured a slightly different body.
Based off the design of its debut in 1979, we present our newest MFH 1/12 Full Detail Kit – the 512BB LM!

K534 Ver.D : 1980 LM Scuderia Bellancauto #79 PRICE 80,000yen(without tax)
Based on the Bellancauto team entry in 1980.
Various differences between the versions have been faithfully reproduced, such as the louvre on the front cowl, shape of the side ducts, shape of the nose, mirror etc. Differences to the wheel design of Ver. A and B. have also been recreated.