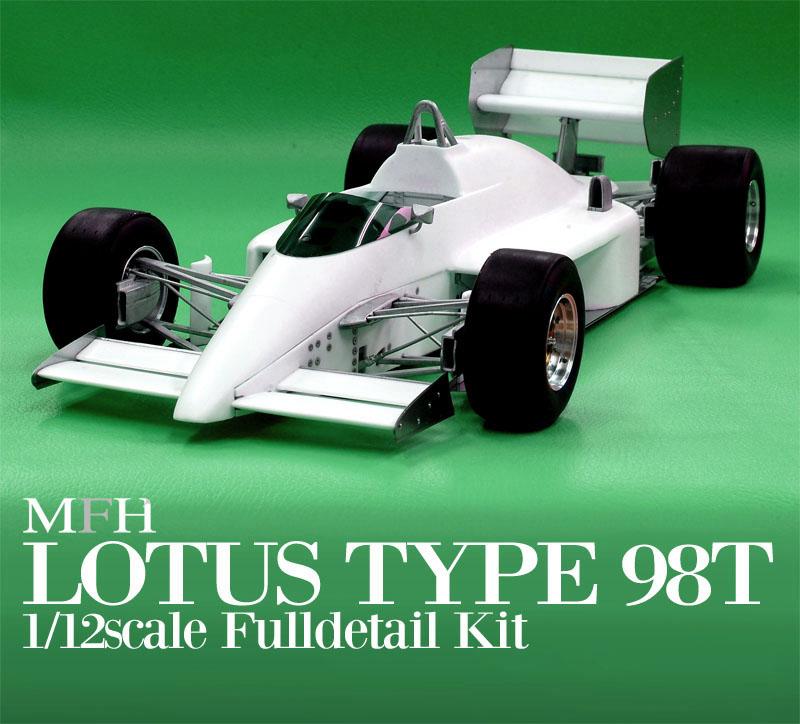 The year is 1986. The “Ace” in the previous season, de Angelis left the team, making A. Senna the No. 1 drivers from every aspect. The machine driven by Senna in the 1986 season, LOTUS TYPE 98T will be in the large 1/12 scale from MFH.

The 98T was designed by Gérard Ducarouge, who achieved great result in the previous designs. The 98T was based on the previous model 97T and installed with the Renault turbo engine and with improved aerodynamics to utilize the power of the engine.
The shape of the rear cowl part was changed and to be integrated with the side parts , front wing changed to straight type, and the side of the diffuser had been also cut. The shape of monocoque, rear suspension design, transmission, engine champer, intercooler, and radiator etc. are updated in 98T.

Together with the transforming to 1/12 scale, the shape of parts had been reviewed and newly designed. Changes between 97T and 98T will also be

This kit will be including the V6 engine, the pioneer of installing turbo in the F1 engine, with the unique mechanism.

The wheel rim are made of aluminium, the wheel dish are made of aluminium and coated with almite gold colour. However in the Hungarian GP version, where the team changed to use the dish made by Dymag in the second half of the season, the kit will also include this change including the colour from gold to black.

This kit is a multi material kit. Various pipings, tubes, mesh hose, and etc are included.

The under plate will be a large photo etch piece, to increase the level of reality and the texture.

The cowl is attached by screw and can be easily detached to review the interior parts.

[ Ver.B :1986 Rd.5 Belgian GP ]
This version is based on Round 5 Belgian GP. The angle of the flaps had been changed and the rear wing specialized for this circuit. Also including differently shaped front and rear brake duct.

[ Ver.C :1986 Rd.11 Hungarian GP ]
This version is based on Hungarian GP which A. Senna finished in 2nd position, fought vigorously with Nelson Piquet from the Williams Honda.
The black almite wheel dish which had been used frequently in the second half in the season will be included.