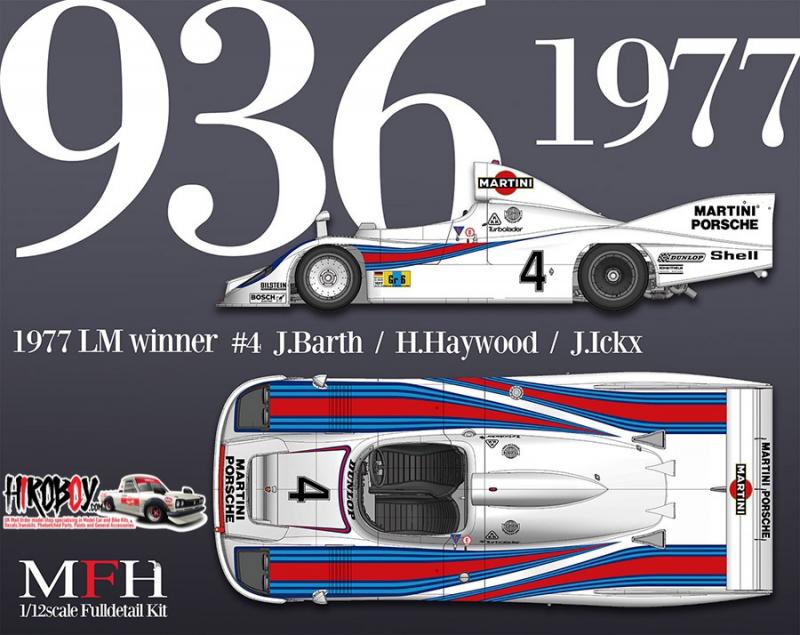 After conquering Le Mans in 1970, and continuing to dominate the sportscar scene in both Europe and North America, the works team put the 917 to rest due to regulation changes in 1973. In 1976, Group 6 was reclassified to contest for the World Championship for Sports cars, while Group 5 contested for the World Championship for Makes series. .To enter the World Championship for Sports Cars series the works team developed the 936.
Carrying over previous designs from the successful 908/3 and 917/30, the 936 featured a light aluminum space frame chassis and an aerodynamically reliable FRP-based body. The engine was a 2.1 liter flat-6 twin turbo, an upgrade of what was used by the 911 Turbo RSR. The speed and reliability nurtured from the previous designs was combined by the team into this new vehicle, and it showed its strength clearly on the road, winning both the World Sportscar title and the Le Mans on its year of debut in 1976.
In the following year of 1977, the works team retired from the World Championship for Sports Car series but continued to participate in Le Mans. The rivaling Renault team was unable to stop them despite entering 6 cars, and the works team was able to claim a back to back victory at Le Mans.
The 936 managed several other accomplishments for the team in the following years, including 2nd place at Le Mans in 1978 and 1980, and a third 1st place victory in 1981. It continued to race until it was replaced by the Group C car, the 956.