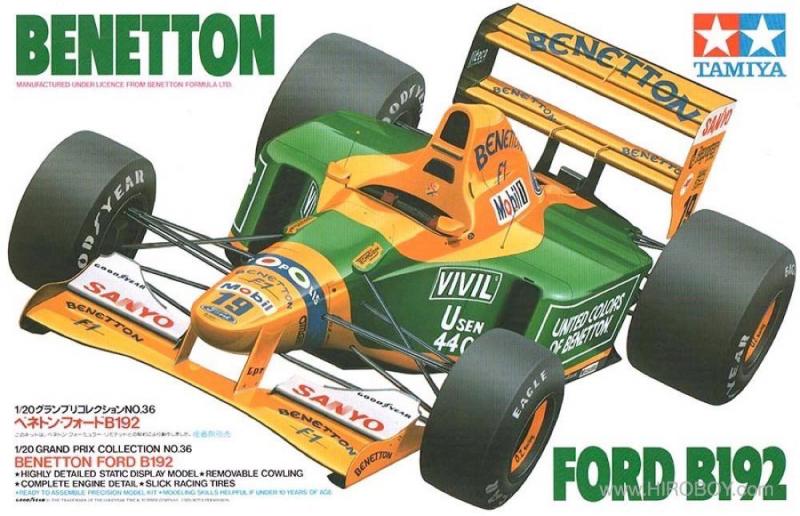 About the Benetton Ford B192

The Benetton Formula Racing Team first raced their B192 in the 1992 F-1 Spanish Grand Prix, during the 4th round of the season. Owned by the Benetton group, a world renowed apparel manufacturer, the B192 racers were painted in an eye-catching yellow and green two tone scheme. Competing against the dominant Williams and McLaren, Benetton was still a regular on the winners podium throughout the season. What made the team one of the top contenders was their machines clever packaging and excellent aerodynamics.

The B192 featured a distinctive nose cone, which was sometimes referred to as "Shark Nosed". Two vertical plates suspended the large front wing below the nose. Rear edge of the defuser was extensively warped upwards, which produced the efficient downforce desired. These unique and effective approaches to racing design, were created by the talented designer Rory Byrne, following an extensive testing in aerodynamics. Under the rear cowling lies a Ford developed, high-revving, Type HB V-8 cylinder engine. Although other V-10 and V-12 cylinder engines had the advantage of larger power output, Ford HB engine's light weight and compact design provided a superbly balanced package.

With talented drivers Michael Schumacher and Martin Brundle at the wheel, the Benetton team earned points in all 16 rounds of the season, including Schumacher's first F-1 victory during the Belgian Grand Prix in the 12th round, and finished 3rd for the constructor's title.