Price: £263.99 Sorry, currently not in stock!
Get notified when back in stock

One of the most storied racing teams of all time, Alfa Romeo is a company deeply tied to its racing heritage. Its exploits on the race track are legendary and include numerous wins at such great international motorsport events as the Targa Florio, Mille Miglia, and the 24 Hours of Le Mans. Countless great drivers have graced the cars from Milan, including Tazio Nuvolari, Louis Chiron, and Enzo Ferrari.

Autodelta, a company established by ex-Alfa Romeo and Ferrari engineer Carlo Chiti, formally joined forces with Alfa Romeo in 1963, with the purpose of restoring Alfa Romeo’s motorsport teams to the former levels of success they experienced prior to the Second World War. One of Autodelta and Alfa Romeo’s finest creations was the Tipo 33/2, created in 1968 to compete in the World Sportscar Championships. The year 1968 witnessed a series of significant results for the 33/2, with the car taking 2nd overall at Daytona and decimating its competition at Le Mans, as it took 1st through 3rd in its class, which was good for 4th, 5th, and 6th overall. By 1969, Alfa’s engineers had learned much from their experiences with the 33/2 and released the car’s replacement, which would go on to be one of Alfa Romeo’s most celebrated sports car racing platforms, the Tipo 33/3.

The most important changes in the Tipo 33/3 from its predecessor dealt with the car’s chassis and engine. The new car used a chassis constructed from titanium-reinforced avional-boxed steel and adapted open bodywork, whilst the 33/2 utilised closed bodywork. Utilising a new 90-degree V-8 engine, the engine’s output was increased to three litres over its two-litre sibling. This resulted in an increase of a whopping 130 horsepower from the original two-litre engine. 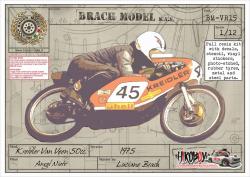