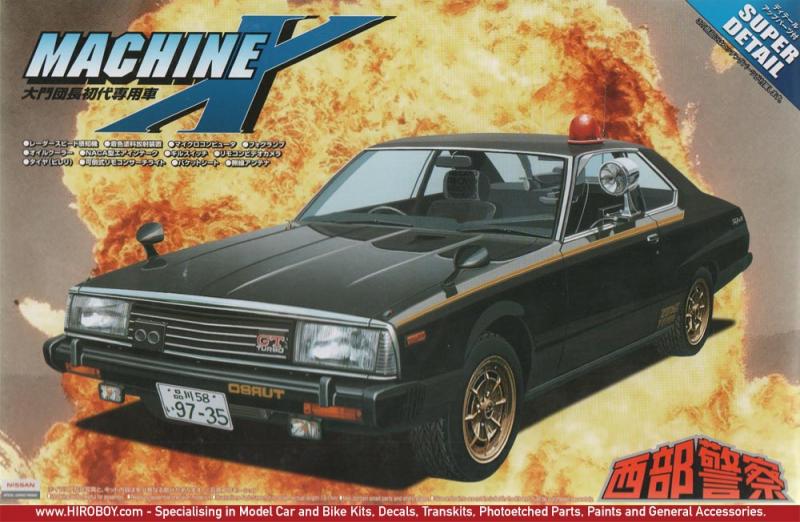 Nissan provided a wide variety of vehicles for the show, most notably for use as police vehicles as well as villain vehicles. The majority of the patrol cars in the show are a mix of Nissan Laurel, Gloria, Cedric as well as Skyline sedans. For vehicle wrecking scenes the 230 and 330 model Cedrics, Glorias and Laurels were mainly used; as the filming staff had strict orders not to damage any of the 430 model Cedric marked patrol cars.

The series also had several notable cars used by the main heroes, including RS Machines 1 to 3, all of which were based on the Nissan Skyline DR30 Turbo RS; as well as Machine-X, a modified Nissan Skyline 2000 TURBO GT-E (HGC211) used primarily by Chief Daimon. There was also Super-Z; a modified Nissan 260Z 2by2 with gull-wing doors, turbocharger, nitrous, computers, and also quad 20mm guns mounted on the hood. More noteworthy vehicles include a 1980 Nissan Safari which was also heavily modified with a radar camera, computer and also a water cannon with a water pressure so high it was shown to be able to filp a car; and lastly a 1980 Nissan Gazelle convertible, which was Section Chief Kogure's personal vehicle. Being a motorcycle cop from the beginning of the series Eiji Hatomura (played by Hiroshi Tachi) used modified Suzuki motorcycles; in particularly a GSX1100 Katana, which was his character's favourite bike in the series.

Almost all of the special vehicles are as of today, preserved inside the Ishihara Yujiro Memorial Hall. The Safari is now in a Nissan museum.