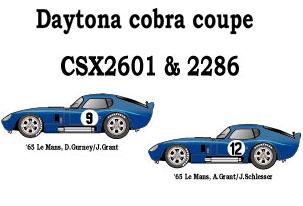 This was the fourth Coupe built and the third completed at Carrozzeria Gransport. It competed in eight FIA races in 1965 (Daytona, Sebring, Monza, Spa, Nürburgring, LeMans, Reims, Enna), won four times in GT III class, at Monza, Nürburgring, Reims, Enna), and driven by Bob Johnson, Tom Payne, Bob Bondurant, Allen Grant, (German) Jochen Neerpasch and Jo Schlesser (an outstanding French driver who was killed in an accident at the French Grand Prix in 1968).

At Reims, 3-4 July 1965, drivers were Bondurant & Schlesser. It was painted Guardsman Blue. They won the GT III Class. It was at Reims on July 4th that this car earned the points needed to secure the 1965 World Manufacturers Championship.

Even though 2286 is the lowest chassis number of the six Daytona Coupes built, it was the last Coupe completed.
It was originally intended to place a 390 cubic-inch alloy V8 in 2286, so during construction at Carrozzeria Gransport in Modena, Italy, the body and frame were stretched to accommodate the big-block motor. These modifications caused a delay in the completion of this coupe.
2286 was ready for the 1964 LeMans race, but was badly damaged when the truck transporting it from Italy to LeMans was involved in a crash.
During the winter of 1964-1965, Shelby's organization began to focus on the GT40 program and started to experiment with a 427 cubic-inch V8 in the mid-engine GT40. It soon became obvious that a big-block front-engined Cobra Coupe was not the way to go, so 2286 was converted back to standard frame and body lengths and a 289 cubic-inch motor was installed for the 1965 season. In this form, 2286 was raced only once by Shelby-American.
2286 was raced at the 1965 LeMans 24 Hours driven by Dan Gurney and Jerry Grant. During the 15th hour, running as high as 3rd overall and having set a GT lap record, the car experienced clutch failure and left the race prematurely.
After the 1965 season, 2286 was used in the 'Cobra Caravan' which traveled across the country to publicize Ford's racing successes. 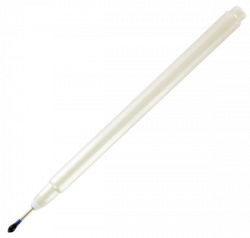 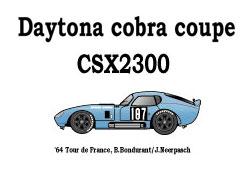