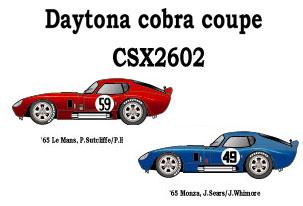 This was the fifth Coupe built and the fourth completed at Carrozzeria Gransport. It competed in six 1965 races (Daytona, Sebring, Monza, Spa, Nürburgring and LeMans) and was driven by Rick Muther, John Timanus, Lew Spencer, Jim Adams, Phil Hill, Jack Sears, John Whitmore, Peter Sutcliffe and Peter Harper. The #59 Swiss Red Coupe was campaigned in 1965 by Scuderia Filipinetti. Prior to the Le Mans race, chassis CSX 2602 was also raced at Daytona (driven by Rick Muther and John Timanus) in 1965, Sebring (driven by Lew Spencer, Jim Adams, and Phil Hill) in 1965, Monza (driven by Jack Sears and Sir John Whitmore) in 1965, and Nurburgring (driven by Jack Sears and Frank Gardner) also in 1965.

The #59 Daytona Coupe with British drivers Sutcliffe & Harper, ran in the distinctive Red & White Swiss colors only for the '65 LeMans event June 19-20, 1965.

This interesting color combination was the well known colors of the famous Swiss racing team, the “Scuderia Filipinetti”. The latter had already earned a reputation for themselves racing Ferraris. When Ford used up their allotment of entries for the 1965 Le Mans race, they asked Georges Filipinetti (owner of the team), to buy a Coupe and enter it as his annual entries. Thus the unusual color scheme. Peter Sutcliffe and Peter Harper (well known Ferrari drivers) were the team’s drivers at Le Mans. They vigorously raced the red and white Cobra Daytona Coupe until the 10th hour when a blown engine put them out of the race. After Le Mans, chassis CSX 2602 was returned to Alan Mann Racing. It was repainted in the Shelby American team colors and never raced again. http://www.thecarsource.com/shelby/cobra/daytona/daytona_cobra_coupes.shtml