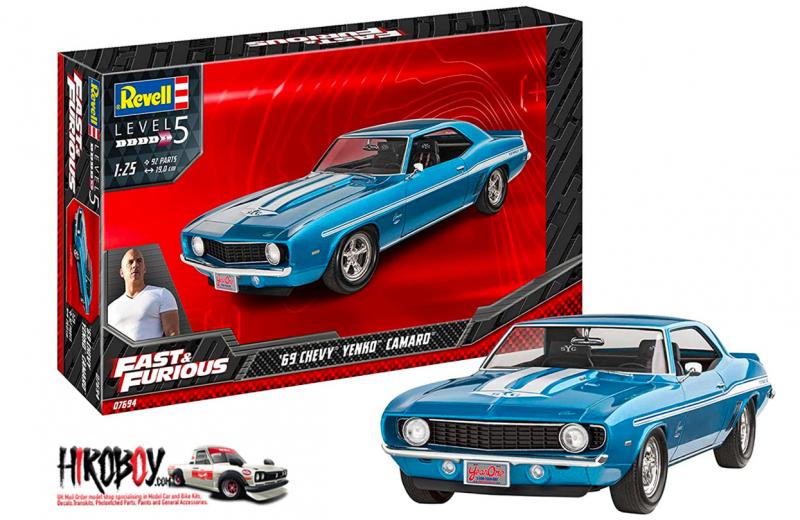 1/25 Skill Level: 5 Length: 7.437Inches Width: 2.812" Heigth: 2.062Inches Parts: 107 Description In the second of the Fast & Furious movies, the street racing competition heats up and the cars get faster. While it doesn’t win in the movie, the Yenko/SC Camarois a real winner today. When the ChevyCamarowas introduced in 1967, Don Yenko saw an opportunity for his Chevydealership to offer special performance versions. In 1969, Don was able to order uniquely equipped Camaros under the special GM COPO order program. So Yenko Chevy ordered 201 Camaros with L-72 engines and a list of other performance extras. The Fast & Furious movie franchise now includes over 7 movies, and it is the most popular series Universal Studios has ever produced. The Camaro wasn’t the first special performance car Don Yenko’s dealership offered. In 1965, they built specially modified Corvairs called “StingersInches . Starting in 1967, Don switched to specially modified Camaros. The 1969 Camaro COPO cars were equipped with a 450 horsepower 427 c.i. engine, power disc brakes, a 4.10 Positraction rear end, a Z-28 front anti-sway bar and the choice of a M-21 four-speed or Turbo Hydramatic 400 automatic transmission. On the outside, there was a cowl-induction hood and front and rear spoilers. It was all topped off with special Yenko graphics and badges.