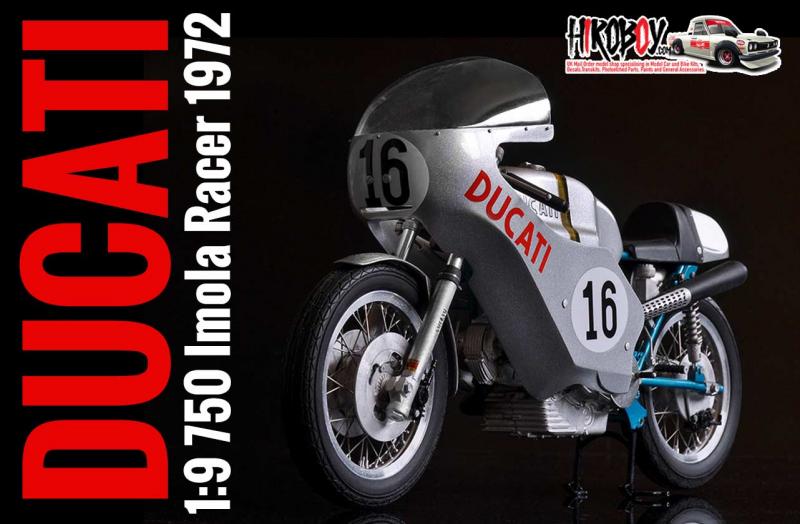 Price: £479.99 Sorry, currently not in stock!
Get notified when back in stock

About the Ducati 750 Imola Racer 1972
In order to meet the demands of the US market, Ducati began development of large displacement/2-cyclinder engines in the late 1960. Fabio Taglioni, designer of the famous desmodromic system used in Ducati engines, went on to designed a L-twin (90 degrees V-twin) engine which was first revealed at the 1970 Milano Show. In 1971, a 500cc racer bearing this engine was entered into Grand Prix events, but it was no match for MV Agusta and their rider G. Agostini.
While the 500cc failed to impress, Ducati also developed a 750cc racer at the same time. These 750cc bikes were to be entered in the first ever Imola 200 mile race in 1972. It would be at this race that Ducati would make a name for itself, as the 750cc racer managed to beat out it rivals and claimed victory with a 1-2 finish. It was a historical win that would touch the hearts of many as it was the first big race that Ducati had ever won, and when winning drivers Paul Smart and 2nd place Bruno Spaggiari returned to the Ducati headquarters in Bologna they were greeted by a lively crowd. In commemoration of the victory, replicas of the 750ss (the Ducati 750 Super Sport) began public sales in 1974.