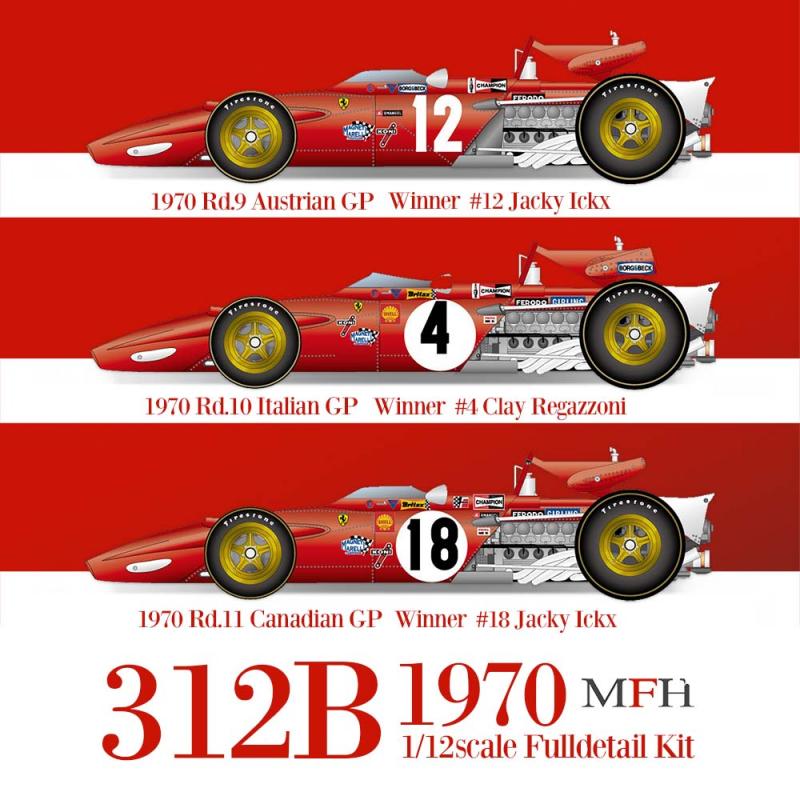 Have shared little success with the 312F1 between the years of 1966 to 1969, a new engine was developed under the direction of Mauro Forghieri. The new engine was a flat-12 engine, featuring a completely different weight, size and center of gravity with hopes of better performance than the old 60 degree V12 used by the 312F1.
The new engine would make its first appearance with the 1970 Grand Prix entrant: the 312B. While the 312B featured a traditional steel tubular frame chassis and an aluminum body held in place by rivets, it definitely proved to be a step above the 312F1. In the early part of the 1970 season, the 312B proved to be fast but was unreliable and saw many retirements. In the later half of the season it managed to overcome its weaknesses, and at Rd. 8 in Germany J.Ickx managed to take second place. At the next race in Austria both Ickx and Regazzoni managed a 1-2 finish, and Regazzoni was able to claim his maiden victory at the following race in Italy. The pair managed two more 1-2 finishes: at Rd. 11 in Canada and the final race in Mexico.
The point leader for the season was J.Rindt of the Lotus team, who suffered a fatal accident during a practice session before the Italian GP. As no one was able to score more points than Rindt after his death, the constructors title went to Lotus for the 1970 season. With the success of the 312B in the later half of the season, Ferrari managed to take 2nd place in constructors and J.Ickx took second place for the driver’s title with a 5-point difference from Rindt.
Ferrari would continue to change and upgrade their chassis designs, but the ‘boxer’ engine introduced in 1970 would continue to support the team, being featured in 312B2, B3, the 312T series etc.