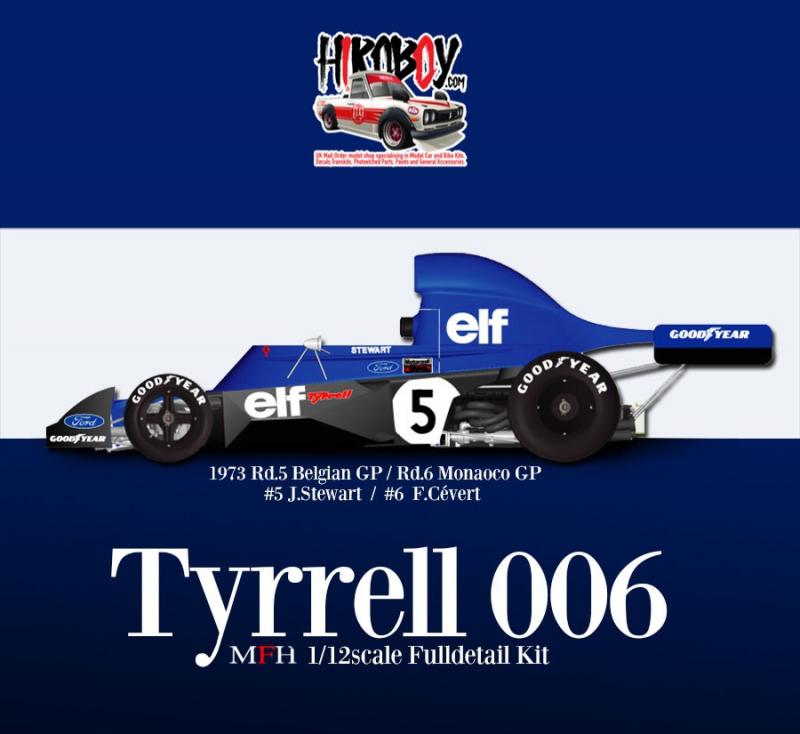 Coming Soon! Sorry, currently not in stock!
Get notified when back in stock

After retiring from racing in late 1950s, Ken Tyrrell started up his own racing team, and in 1968 his team would work together with French auto manufacturer Matra to enter F1. Working as the team principal, the team managed their first win during the 1969 season with their driver Jackie Stewart taking the drivers title. In 1970 Tyrrell would split ways with Matra and work as their own team. With designer Derek Gardner, the DFV engine from Ford, and drivers J.Stewart and François Cévert, the team was able to take another victory in 1971 with their third car, the 003. However in the following season Stewart lost out to Emerson Fittipaldi from the Lotus team and finished the season in second place only.
In 1973, Tyrell would enter their new machine, the 006, which they tested during the final rounds of the previous season. The 006 was equipped with a DFV engine, large induction pods, aluminum monocoque and a sports car nose like its previous iterations, but would take each element to its maximum potential. Stewart took Drivers Championship with 5 wins during the season, and Cévert also managed to take 2nd place 6 times. However, Stewart's driver championship for this season became the last championship won by the team, and with Stewart retiring from racing and Cévert having passed away during the qualifier run for the U.S. GP, 1973 marked the end of an era for the Tyrrell team.