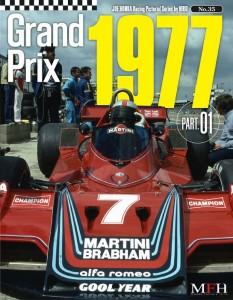 The No. 35 issue of the Racing Pictorial Series by HIRO will be focusing the year which LOTUS 78″ debuted and started the era of ground effect, the 1977 Grand Prix season. This issue is the first part (Part 01) of the feature.

This issue will be featuring the superfast machine LOTUS78, and those who cannot shorten the distance therefore cannot win the race: like the Braham BT45B, Alpha Romeo, the Tyrrell P34 6-wheeler which is the 2nd year in battle, The Ligier-Matra JS7 and Shadow DN8 which won their first champions in this season. Also including cars like ENsign N177, ATS, March 771, BRM P207, and etc.
This issue contains many photos of LOTUS78 and the BT45B, the good companion for modeling references!