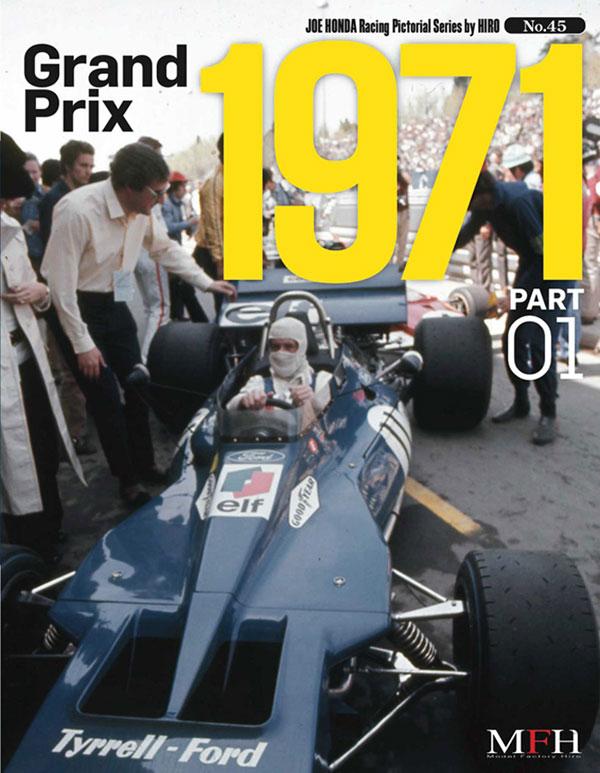 The issue No. 45 of “Racing Pictorial Series by HIRO” will be featuring Tyrrell Racing, which debuted as the F1 constructor at the end of 1970, and she swept over the 1971 races with “Flying Scot” Jackie Stewart.

This feature will be same as the 1970 season feature, splitting in two parts (PART-01 and PART-02). This “PART-01″ cover will be starring Tyrrell and Stewart.

The season was a boring season if you only focused on the fact that Stewart almost dominated the champions all over the season, however it was an interesting season if you are looking into the standings below the first one, the vigorous duels between the rookies and the veterans, and the duels between different constructors.

This “PART-01″ issue will be focusing 5 teams including the Tyrrell team with Stewart and Cévert, the famous cosmetics brand Yardley and the design by the genius Tony Southgate brought new life to the classical team BRM (“Jo” Siffert/Pedro Rodrìguez), the combination of Chris Amon and Beltoise from Matra, Denis Hulme from the McLaren after the lost of Bruce, and the “Big John” for the Surtees.

The rare photos of showing the details of the machines and circuits, the drivers and the mechanics, and even the fashions of the viewers, all represented in the photos of these antiques circuits. Please also enjoy the nostalgic moments about ’70s European teenagers fashion trends!